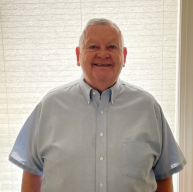 Originally from Hampton/Virginia Beach, Virginia. Graduated from Hampton High School in 1959.
Became a Master Gardner in Virginia. Most of his career was as a Master Floral Designer. Was selected
to do the flowers for Queen Elizabeth on her first visit to America in 1957 and was awarded a Warrant to
serve the Queen.
Later he opened a Special Event Company. The first large event was a fundraiser dinner (4,000 guests)
for a birthday celebration for the U.S. Senator for Virginia, who became his largest supporter for years.
Traveled the world coordinating large events and a few very large weddings. He also started a Prop
Company which became the largest on the East Coast. He was honored to coordinate the Inauguration
for President Clinton.
After 30 years sold his business and came to Burnsville with his wife Sharla, and built their beautiful
dream home. After such a busy career he started to volunteer – first with Burnsville/Yancey Chamber of
Commerce – 20 years. Joined the Foundation Board of Mayland Community College, and started the
Tour of Dream Houses in Yancey County to raise funds for scholarships for Yancey students to attend
Mayland Community College.
He introduced the president of Mayland, Dr. John Boyd (to his close friend) Dr. Bill Anspach, and
Anspach School was born—the rest is history. He helped with the fundraising to complete the Anspach
School. Which has educated untold Yancey students that have stayed locally to work after receiving
their degree in applied science. He helped to form the first class of Master Gardeners in Yancey County,
and helped establish The Farm to Fork Dinner on the Square, as a fundraiser for Tractor/Sustainability
Food in Yancey County.
After his wife died in 2010, he choose to stay in his beautiful home alone rather than move into a small
condo. He opened his Carriage House as an Air B&B and is ranked as a Super Host (for 4 years) to
welcome guests to the community.
Bill joined the board at Parkway Playhouse in 2020, and serves on the Fundraising committee in hopes of
helping to keep Parkway viable for another 75 years.